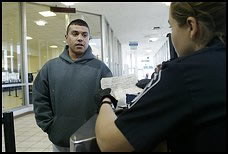 U.S. District Court Judge Susan Bolton has issued a preliminary injunction preventing several sections of Arizona's new immigration law from becoming law, at least until the courts have a chance to hear the full case.

Key parts of Senate Bill 1070 that will not go into effect Thursday:

The ruling says that law enforcement still must enforce federal immigration laws to the fullest extent of the law when SB 1070 goes into effect at 12:01 a.m. Thursday. Individuals will still be able to sue an agency if they adopt a policy that restricts such enforcement.

Bolton did not halt the part of the law that creates misdemeanors crimes for harboring and transporting illegal immigrants.

She denied legal requests by Gov. Jan Brewer, Maricopa County Sheriff Joe Arpaio and several other defendants seeking to have the lawsuits dismissed because, they argued, the plaintiffs did not prove that they would be harmed by the law if it went into effect.

Next, hearings will be scheduled to begin hearing the full case in the seven lawsuits. All or some of the suits could be consolidated. A full court hearing is likely to involve appeals, possibly as far as the U.S. Supreme Court, and could take several years.

Gov. Jan Brewer is in Tucson and could not immediately be reached for comment.