Last week we covered the first half of Michael Motorcycle's trip to the 13th Annual Rocky Point Rally...here's the rest of the story.

People I Met Along the Way 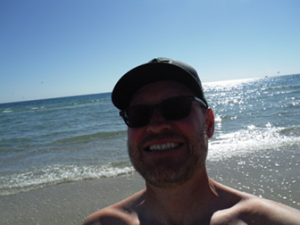 All of the locals and all of the bikers that I encountered were friendly, and literally everyone seemed to be happy about being in such a beautiful place. I talked with bikers from all over and even some from as far away as Canada. I also got to chat with some ex-pats who had either retired to Mexico or who had setup local businesses. I couldn't help but be a little jealous that they would get to stay in Rocky Point, while my trip was only for a few short days. Puerto Peñasco just seemed to make everyone happy, and I even noticed that the groundskeepers were smiling as they were performing their duties and watering the plants.

Helping a Charitable Cause

Driving through Sonoyta and through the outskirts of Puerto Peñasco, I could not help but notice the rather stark contrast that exists between these two colorful yet impoverished sister cities, and the long row of towering resorts that stand gleaming along the beach. It reminded me that ultimately this huge biker rally event is being held each year to help provide critical funding for some important community services in these small communities. The locals, that I chatted with along the way, did not seem to mind having thousands of rumbling motorcycles converge upon their typically sleepy little towns. Perhaps partly because of the benefit that is gained by the registration fee/donations that are given to the local charities and partly because of the overall economic benefit that tourism has for the area.

On the second day of the rally, I elected to join a group ride, offered as part of the Rally events, to El Pinacate Biosphere Reserve and the Schuk Toak Visitors Center. At about 10:00 o'clock in the morning, approximately a dozen bikes lined up at Rally Registration point, at Barclin's Circle K, on the northern edge of town. From there we made a short half-hour ride north towards the entrance of the Pinacate Biosphere Reserve, located in the Gran Desierto de Altar, which was recently added by the International Union for Conservation of Nature to its List of World Heritage Sites in danger.

The staff at the visitor's center was gracious enough to give us bikers a free tour of their fascinating little museum. We learned about the diverse history of the region, including the ancient Tohono O'odham Indian tribe (previously known as the Papago), along with the Spanish Conquistadors and Missionaries who have occupied the area. We were told about how the Tohono O'odham had given the name Schuk Toak, or 'sacred mountain', to the dark colored peak, seen in the distance from the visitor's center, where the tribe believed all life on the planet had originally begun. We also viewed a short video presentation that highlighted the flora and fauna of the region, which is far more diverse with wildlife than one might imagine, looking out at the vast expanse. The staff also pointed out that there were self guided walking tours available around the visitor's center, where one could further explore and enjoy the beauty of the great desert. The short tour was definitely a nice little break from all of the hustle and bustle of the rally's many festivities.

Enjoying the Beach at Rocky Point

Of course, I did spend some very enjoyable time just walking along the beach. It was super relaxing to feel the sand squish between my toes, as I strolled along picking up sea shells and watching seabirds. During one of my strolls, I happened upon what looked to be a huge volleyball tournament, with dozens of sand courts all in play at the same time. There were also a lot of other activities available for those who are a little more adventurous, including:

I did not have a chance to get out for a round of golf while I was in Rocky Point, but I did see that there were three great looking courses available:

I also did not get to do any fishing, which seemed a little unfortunate, since Puerto Peñasco was originally a fishing village. However, I did learn that the best time of the year for hooking a big one is during the spring and summer months.

The Gran Fiesta and Bike Parade at the Malecón 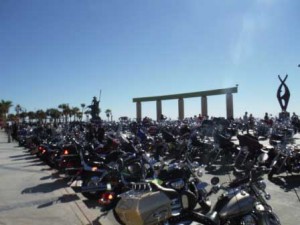 The party and bike parade through the Malecón was definitely "off the hook," with thousands of bikes, bikers, and biker babes taking part in La Gran Fiesta. The sounds of music, cheering and suped-up engines, along with the smells of burning rubber, sun-block and fresh seafood filled the air, as party revelers spilled out of the many cantinas, and beaded necklaces were tossed in every direction. Overall, the atmosphere at the Malecón was something akin to Sturgis meets Mardi Gras, at the beach.

The ocean of motorcycle chrome next to the sea was certainly a site to behold. While most of the motorcycles at the event were notably Harley Davidsons, there was also a fair representation of just about every kind of motor bike that you could ever imagine. Alongside many beautiful custom bikes, were all sorts of touring bikes, sport bikes, dual sport enduros, trikes, dirt bikes, scooters, choppers, mini bikes, rat bikes, and plenty of metric cruisers. Needless to say, my big old 99 Valkyrie fit right in with the virtual smorgasbord of motorcycles.

The Journey Back Home 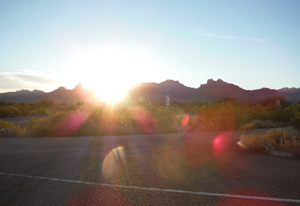 In an effort to avoid the anticipated long lines that would come with thousands of bikers all headed back to the U.S. at the same time, I started out towards the border before dawn. I was of course treated to a gorgeous Mexico sunrise on the way home, and I pretty much had much of the road to the border all to myself. Being an early riser paid off this time around, as there was no waiting when I reached the border crossing checkpoint. The customs official simply asked to see my passport and then I was quickly on my way. By 7:00 am I had already made it back to Ajo, Arizona.

As I made my way back across most of the state of Arizona and up through the mountains towards Flagstaff, I couldn't help but think about all that I had seen and enjoyed while I was in Puerto Peñasco. There was definitely a sense of contentment from having taken part in the 13th Annual Rocky Point Rally. The main thing that kept going through my mind, as I carved out the last miles leading home, was how I might be able to convince my boss that he should send me to next year's Rocky Point Rally...